Click on this link to see some amazing images and video clips of this beautiful area.
www.grandsites.midipyrenees.fr 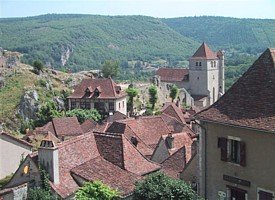 St-Cirq-Lapopie one of the most beautiful villages in South West France, spectacularly overhangs the river Lot. Dating back to medieval times, the village has long been associated with artists, of which many are active today.

Cahors the historic and beautiful capital of Quercy, is looped by the winding River Lot. Dating back to Roman times with it’s ramparts and historic monuments, most notably the magnificent Pont de Valentré, it is a well known landmark of the region.

The medieval town of St Céré at over 200m altitude, has stunning views all round. This bustling market town is a perfect place to sit and watch the world go by, with its many cafes, hotels and restaurants. During World War II, the artist Jean Lurçat operated a secret Resistance radio post here; after the war he turned it into a studio, and it’s now a marvellous museum of his work. 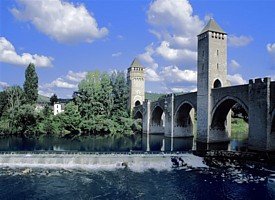 The Gouffre de Padirac is a natural chasm that opens onto the limestone plateau of the ‘Causse de Gramat’. Hundreds of feet below, a guided boat tour takes you along an underground river amongst the stalagmites and stalactites. A unique and truly magical experience.
www.gouffre-de-padirac.com

Perched on a limestone cliff is the Historic Shrine of Rocamadour  devoted to the Virgin Mary it has remained a symbol of faith and hope for over 900 years, attracting pilgrims from every country. More recently, it attracts visitors and artists inspired by the breathtaking beauty and archaeology of this spectacular village.
The town also gives its name to Rocamadour cheese, a small round of goat’s milk cheese that is found throughout the region. 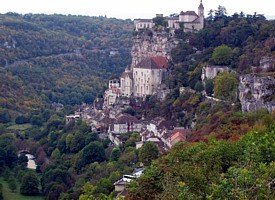 Lying on the River Célé is the beautiful town of Figeac with it’s unspoilt medieval centre. In the Middle Ages it became a centre of tanning, which partly accounts for the many houses whose top floors have open-sided wooden galleries used for drying skins and other produce, mainly tobacco. The birth place of Jean-Francoise Champollion, in 1790, who was responsible for deciphering Egyptian hieroglyphics, and is much celebrated as the founding father of Egyptology.